This is the LionsBase product website, please go to your club's website instead.
EN | FR | DE | IT | NL

Instead of providing hundreds of highly specialized plugins and statistics reports, LionsBase relies on a 3rd-party extension (EXT:simple_io) to export data. It is then up to the user to prepare statistics and other analysis.

Those records consist of: 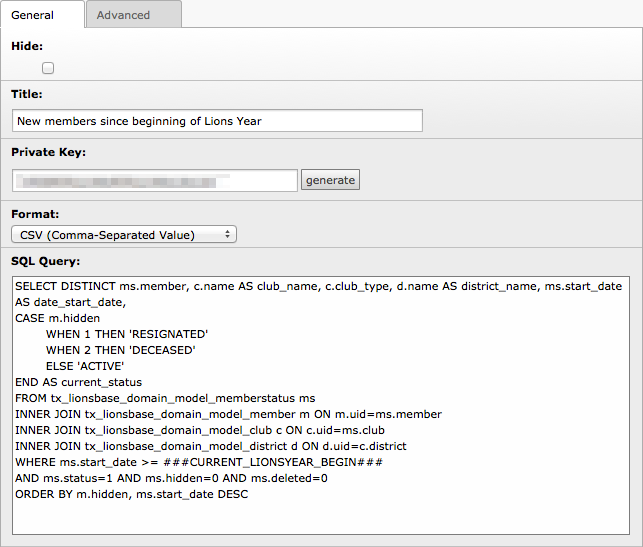 You may have seen that the query above contains placeholders. In fact, the 3rd-party extension lets us pre-process the query before the execution. LionsBase supports a few Lions Club-related placeholders:

and a few dynamic placeholders:

Good to know: The export configuration records are managed by the LionsBase Developers at Causal Sàrl and thus cannot be modified by Multiple District LionsBase Masters.

Multiple District LionsBase Masters may put a plugin on their pages (typically somewhere within the Intranet). To use it, create a new content element on your page and choose the plugin “List of export configurations”:

The plugin shows the list of existing export configuration (on the right) and lets you select which of them should be made visible (on the left). The idea behind this selection is to let you restrict access to sensitive list of data to only those of your members who need to access them (e.g., the list of all members within a district could be restricted to governor council members).

The plugin renders a bulleted list of links pointing to dynamically-generated files containing the information as requested. The visibility of those links is configured by the access restrictions for the plugin itself or the page containing the plugin. Each export configuration record is created with a private key (see the plugin configuration’s screenshot above).

However, once visible, the link itself is not protected and may be used even when not authenticated to retrieve the information. This is the reason why you must never share the link to the export file with anyone. Instead, you should tell where to find the list of download links (or download the file yourself and send it to whoever asked for the data).