This is a standard maintenance release with enhanced support for the National Convention 2021. In addition, it will store your personal password in a more secure way.

Support for the upcoming National Convention 2021 has been enhanced and now properly shows the start and end time of meta-events: 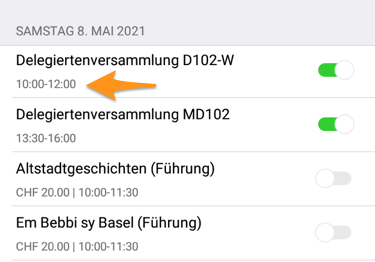 1 The password you use to authenticate is now encrypted with a cipher key stored in the Android KeyStore.

On Android 6 (Marshmallow) and newer, an AES key is obtained from the Android KeyStore and used with an AES/GCM/NoPadding cipher to encrypt the password before it is stored in a shared preferences file.

On Android 5 (Lollipop), the Android KeyStore only supports storing RSA keys, which is used with an RSA/ECB/PKCS1Padding cipher to encrypt an AES key (randomly generated at runtime) and stored in the shared preferences files under the key SecureStorageKey, if one has not already been generated.

If a device upgrades from Android 5 (Lollipop) to a newer version of the operating system, the type of encryption will continue to be used unless the app is uninstalled. But it is worth mentioning that most LionsBase users are running much newer versions of Android already.

Some words about Auto Backup for Apps. Auto Backup for Apps is a feature of Android 6.0 and later that backs up user’s app data (shared preferences, files in the app’s internal storage, and other specific files). Data is restored when an app is reinstalled or installed on a new device. This could possibly impact the secure storage of your user password which utilizes share preferences that are backed up and can not be decrypted when the restore occurs. But we took an extra step to configure an exception in the backup strategy so that this Auto Backup never includes your password.

Since we introduced news in the dashboard (back in Version 2.4.0), only public news created in your club website were included in the LionsBase mobile application.

This restriction has been lifted; this means that your webmaster may now create news only visible to authenticated members. Another enhancement is that the mobile application now supports news which are configured as a redirect to an internal page or to an external website.

Information in this section is adapted from https://docs.microsoft.com/en-us/xamarin/essentials/secure-storage?tabs=android