This release gives you a better overview of event invitations that are waiting to be answered.

A badge now shows the number of events you should deal with, either to announce that you will attend it (or not) or by answering additional questions.

The badge is visible when you open the application menu: 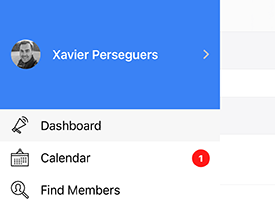 We understand that we should not stress answering an event’s invitation more than a few weeks before its registration deadline; this is the reason why, in order to prevent showing this badge for an extended period of time, we only take events for the next month into account.

If we keep such old compatibility (compared to Apple users), this is related to a very unfortunate fact that Android smartphones and tablets are usually maintained much less than Apple ones. In fact, manufacturers such as Samsung are selling their devices with (usually) the latest available version of Android at that time and provide major updates of the system for something that we estimate for about 2 years in contrast to Apple which supports its devices for as long as 5 to 6 years. We understand that LionsBase application users do not see any need to get a new device every 2 to 3 years (which is totally legit) and as such, we strive to keep compatibility as long as we can.