We strive to let you forget about the printed directory of members. Why? Because cutting down so many trees for an information which is out-of-date even before it is printed is a total non sense in our opinion.

To do so, this version now lets you access the motto of your president, governor and council chairperson.

LionsBase is now capable of keeping track of mottos as you see for the district cabinet of District 102 West: 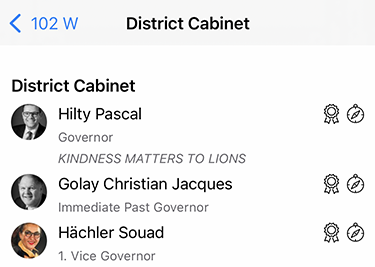 Naturally, you can get the “history of mottos” by taking advantage of the feature introduced in version 8.0.0, namely getting the history of a given function: 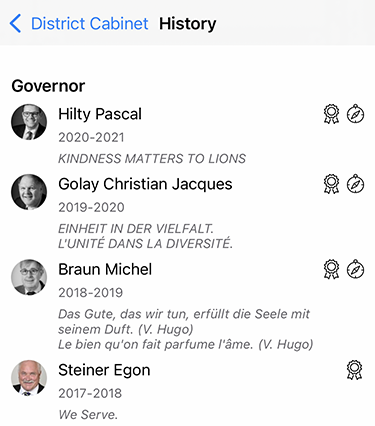 As a CLBM, the motto can be stored by editing the corresponding member’s function.

Following functions can hold a motto:

The accessibility for the list of members has been improved. Instead of focusing individually on each line of information, TalkBack will now read the block of information related to the member as a whole. 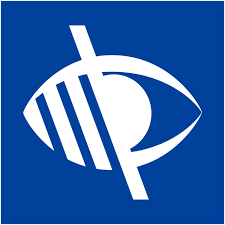 Some webmasters told us they would like to embed links into the description of an event; e.g., to add a link to an external website.

As you know, the event’s description is sanitized when accessed from the mobile application. This ensures a better User Experience (UX) by removing any fancy formatting, colors and alike.

Embedding links into the description is however totally reasonable and after thinking about it, we found a good approach. Here is a sample event as seen on a club website:

and here is how they will now be displayed in the mobile application: 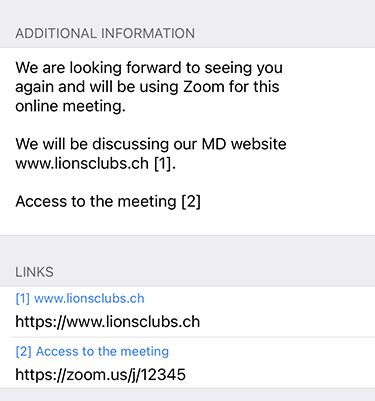 As you can imagine, by extracting the links from the description, we keep it “clean” and make accessing a link very straightforward and at the same time much more accessible for the visually impaired than if we would have kept them in middle of the description.

Another discrete enhancement is visible in the list of club’s social activities. In fact, the application now shows the name of the corresponding president:

If we keep such old compatibility (compared to Apple users), this is related to a very unfortunate fact that Android smartphones and tablets are usually maintained much less than Apple ones. In fact, manufacturers such as Samsung are selling their devices with (usually) the latest available version of Android at that time and provide major updates of the system for something that we estimate for about 2 years in contrast to Apple which supports its devices for as long as 5 to 6 years. We understand that LionsBase application users do not see any need to get a new device every 2 to 3 years (which is totally legit) and as such, we strive to keep compatibility as long as we can.