You may now reach members more easily with Threema and disable the link to WhatsApp if you have no use of it.

After Facebook reached a definitive agreement to acquire WhatsApp back in 2014, (read more), following years have shown no change whatsoever in how both services would logically start taking advantage of each other.

This has changed a few months ago when WhatsApp announced in a blog post that they would start sharing [some] information with Facebook. Although actually not as “harmful” as it sounded, many users decided to quit or seriously lower their use of this application in favour of other chat applications such as Threema, Signal and/or Telegram.

If you want to know even more about it, you may be interested in this article from the RTS (thus in French): Les utilisateurs suisses face aux nouvelles conditions de WhatsApp.

As until then most members would have WhatsApp on their smartphone, we had created a special link to it back in version 6.1 of LionsBase mobile. You could (and still can) indeed tap a mobile phone number from a member’s profile page to quickly start chatting with that person: 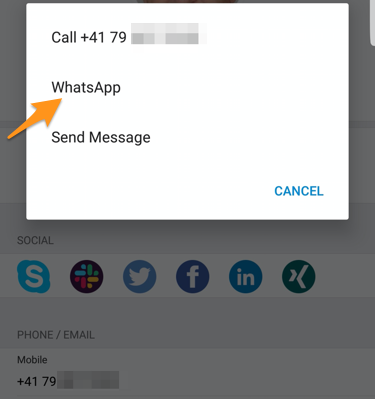 However, if you do not use WhatsApp, this link is totally useless as this chat application may obviously not be launched on your device. This is the reason why, you may now configure the application to hide that action. To do so, you should open the LionsBase settings and choose to disable that feature:

Since WhatsApp is still widely used, by default, that feature is kept enabled. This means that no extra configuration is needed for existing users to continue to use that link to WhatsApp or new user to take advantage of it. Only those application users willing to get rid of this potential useless action may now choose to disable it.

Similarly, another very secure (and Swiss) application has gained popularity among many members [1]: Threema. In contrast with other similar chat applications such as Signal or Telegram, Threema is not bound to the mobile phone number of the user and as such is considered just like any other social network application you can configure on your own:

As you know, the pencil icon (on the right) lets you manage your social networks when you open your personal profile.

We do not plan to add quick actions for other messaging applications like we did for WhatsApp. Rationale is that we have absolutely no way to figure out if the member you want to contact is using the corresponding application. With WhatsApp being so widely used in the past, this was almost granted.

Want to better learn the key differences between Threema, Signal, Telegram and WhatsApp? Here is a comprehensive comparison of those messaging applications: https://threema.ch/en/messenger-comparison.

If we keep such old compatibility (compared to Apple users), this is related to a very unfortunate fact that Android smartphones and tablets are usually maintained much less than Apple ones. In fact, manufacturers such as Samsung are selling their devices with (usually) the latest available version of Android at that time and provide major updates of the system for something that we estimate for about 2 years in contrast to Apple which supports its devices for as long as 6 years. We understand that LionsBase application users do not see any need to get a new device every 2 to 3 years (which is totally legit) and as such, we strive to keep compatibility as long as we can.