This is a standard maintenance release that fixes some accessibility issues.

A visually impaired member reported that she could not take advantage of VoiceOver to get the focus on the two big buttons to attend an event or decline the invitation: 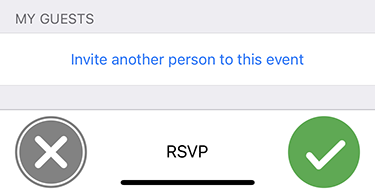 We could successfully reproduce that issue and figure out that the behaviour had changed at some point for buttons or action link disguised as an image instead of some text.

With this release, those two big buttons are now properly exposed again to VoiceOver. As such, participation to an event is accessible again to the visually impaired.